By now, it is early May and sunrises come earlier and earlier. I am able steal a few hours off over a few afternoons to hunt and pattern birds at Stranger 157 in Leavenworth County, Kansas. I can’t begin to exclaim how much I appreciate the opportunity the state of Kansas offers with all day hunting. I am still amazed at the number of gobs and hens this place is holding this year. I have pretty much figured out the prime roost sites.  By mid May, we have had steady doses of rain sufficient to partially flood out the Stranger 157 bottoms for several days at a time. An industry colleague lives nearby Stranger 157 in the town of Tonganoxie. He has several hunting spots near mine, and spends his evenings after work driving around looking for turkeys. He keeps tabs on the Stranger 157 birds. Strangely, it seems there are always two or three gobblers and a half dozen or so hens running around in the afternoon. I would have thought by mid-May that we’d be seeing only but the smallest of flocks. One afternoon, I went over to Stranger 157. Upon arrival, I change into my camo and realize I left me hunting boots at home. I guess it’s better than leaving your hunting vest and jacket at Lynxhaven Lodge in Texas one morning several years ago. I depart with my nice brown slip on boat shoes that became caked in mud, a minor inconvenience. I could see a lone gobbler along a north-south tree line that separates two large fields. Determined to try and call or at least roost this bird, I set up  at the end of a finger of thin timber running north south in the bottoms.  I began calling at around 3 pm. By 3:30, that nice gobbler was strutting persistently in the middle of the field, which seems to be “the strut zone” spot this year. The strutter never gobbles, but walks within 70 yards of my position, then returns to the woods eventually. At 5:00 p.m. I see this gobbler and a couple of hens walk north to the field access road. Knowing they were probably headed to roost, I know where the son-of-a-bitch will likely be in the morning. I text my colleague in Tonganoxie and he agrees to attend a classic roost hunt the next morning. The following morning, we walk east along the field road to the timber dividing the east and west fields. We are with 50 yards of the timber and it is still dark. Finding a tree to lean against was a challenge, it was more like leaning on a twig. The gobbler fires off at 5:45 without hesitation. My friend yelps softly and the gobbler double gobbles….this is going to be good and quick I think. Several hens pitch out trees to our left at 5o yards at about 5:55 and the gobbler can’t be more than 70 yards, I can see him in a large oak tree. I don’t have a great line of sight to the access road that he will likely pitch into, but I see him fly down.  At 6 a.m., I see the white-headed rascal at 15 yards heading left to right in front of me at a steady walk. I slowly track him with my gun barrel and hoping my friend will yelp or cluck to stop him, I see my opportunity for a continuous swing thru about to end, and the bird is painfully close. I decide that this is probably me only opportunity to shoot, so I fire. The turkey takes off running and I fire twice more missing. I get up running thinking I have wounded him a little and try to chase the bird down. We futilely search for the bird for about 30 minutes. It was so disappointing. As I retraced it all, I clipped a few back feathers off at 7.5 yards, a shot too close to take on a walking bird. The bird was only grazed. I don’t whine to my friend about not clucking to stop the bird, but I was frustrated. I am mad at myself for shooting at a bird too close and walking with an extra full choke. I should have let him pass, but I took the dice. Damn it!

Frustrated, I take a few days off and wait out another round of heavy rain and flooding. On May 13th, I agree to meet my friend out at Stranger 157 again at 5:45. To say I hunted would not be true. En-route to the hunting grounds and in the dark, I attempt to avoid flood waters, the road shoulder collapses. the below picture tells what happened and not happened that morning. 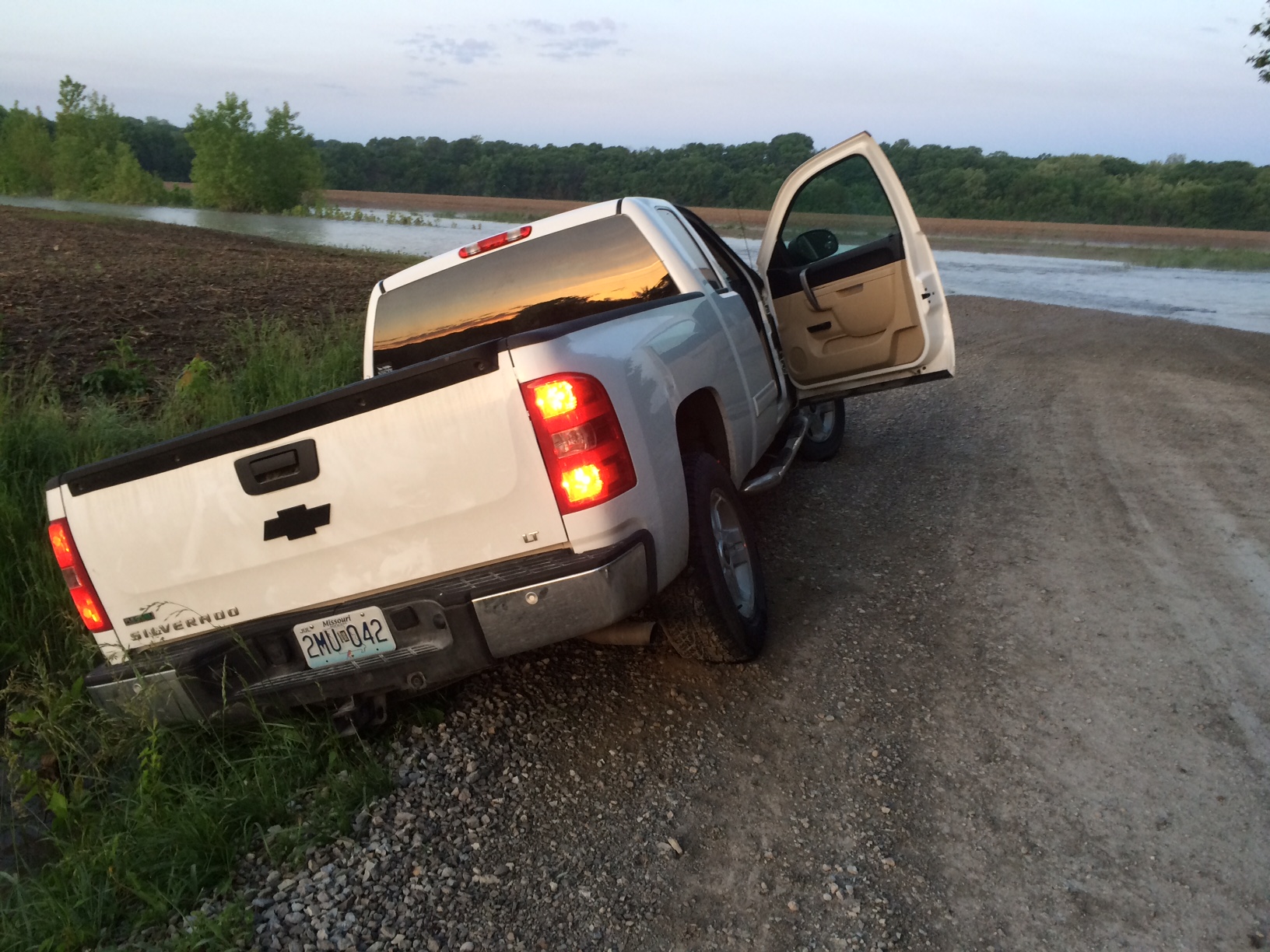 Thank you to the kind stranger who pull me out of the ditch. That wrapped up the season. I hunted 11 days this year. Missouri hunting was frustrating, having gone two years without harvesting a bird. Kansas had the highest of highs, harvesting a 5 bearded gobbler scoring 107, a county record for Leavenworth County. Kansas had the lowest of lows, with a missed shot and a stuck truck. As always, I look forward to the same highs and humiliations in 2017 THAT IS TURKEY HUNTING!!!